The Journal of Peter Saint-Andre

Exactly four years ago I wrote a post entitled "Investing for the Rest of Us", in which I discussed the permanent portfolio investing method, invented by Harry Browne. The permaent portfolio has two additional benefits that I've come to fully appreciate only this year: uncorrelated assets and forced rebalancing.

First, the four permanent portfolio assets - stocks, long-term bonds, gold, and cash - are not highly correlated. If one of them goes down, it's likely that one or two of the others will go up. For instance, if the stock market crashes as happened two months ago, bonds are likely to go up in price (because central banks have cut interest rates) and there's a strong possibility that gold will as well (because investors tend to flee to physical assets in times of uncertainty and volatility). This means that your portfolio doesn't experience wild swings in value; as a result, you're less likely to panic and sell everything.

Second, if one of the assets declines or advances far enough, the permanent portfolio method will force you to rebalance. This means that you tend to buy low and sell high. Specifically, when one of your assets goes above or below your rebalancing bands, you buy and sell enough of each asset to get back to 4x25%. (Harry Browne set the rebalancing bands at 15% and 35%, but Gobind Daryanani's paper "Opportunistic Rebalancing: A New Paradigm for Wealth Managers" indicates that 20% and 30% are more profitable.)

We can illustrate these principles with a simplified example. Let's say you have a portfolio of $400,000 with $100,000 each in stocks, bonds, gold, and cash. If stocks experience a 40% decline, the equities portion will be worth only $60,000; but it's quite likely that bonds and gold will go up, let's say by 10% each. If you'd been 100% invested in stocks your portfolio would be worth $240,000, but because you've spread your savings across four relatively uncorrelated assets your portfolio is worth $380,000. In addition, the rebalancing rule now kicks in: stocks are only 16% of your portfolio, so you'll sell a portion of your bonds and gold to buy stocks and get back to 4x25%. Reversion to the mean indicates that stocks are likely to increase in price again, and you've bought them on sale. (Sure, stocks might continue to go down or bonds and gold might continue to go up, but the future is uncertain and you're probably not smart enough to guess the tops and bottoms of these price trends.)

The permanent portfolio is like a self-correcting gyroscope, which removes the emotions of fear and greed from your financial decision-making. You might think you're wise or self-disciplined enough to do that all on your own, but it's much easier to follow a well-defined method like the permanent portfolio.

Just as people used to ask me how I accomplish so much, recently a few people have asked me how I stay so serene. Although this question is harder to answer, I'll give it a try.

At root, I suspect that innately I am blessed with what theorists of the Five-Factor Model of personality call the trait of emotional stability. There might not be not much you can do to cultivate inner peace if you happen to be on the other end of the spectrum (typically labeled neuroticism).

That said, here are some speculations.

First, I'm convinced that having a balanced "life portfolio" helps keep me grounded. As I sketched in two blog posts a few years ago, I see the areas of life as health and vitality, work and achievement, love and caring, character and personality, wisdom and spirituality, and beauty and aesthetics. I'm extremely fortunate to be in good health, to be somewhat successful financially and in my career, to have a great partnership with my wife, to be emotionally stable, to benefit from deep study of many wisdom traditions, and to appreciate the many beautiful aspects of life all around me.

Second, I've discovered some practices that keep me calm in a world that seems increasingly agitated and angry: I avoid the news, I ignore politics, I dropped out of social media, I follow a low-volatility investment strategy, I read quite a bit of history (life was much harder 500 or 1000 or 2000 years ago!), etc.

Third, I consciously cultivate a philosophical perspective on life. This should come as no surprise, since I majored in philosophy. :-) However, I do find that immersing myself in a wide range of "Minerval arts" enables me to be more reflective, to trim the worst excesses of my actions and emotions, and to understand various outlooks on life so that I can more easily find common ground with other people. Furthermore, taking the long view on human existence and my own life promotes the realization that most of the things people get worked up about are ultimately insignificant.

Fourth, over time I have come to adopt a less dogmatic attitude about human affairs. Part of this is just having lived for some decades, and part of it comes from my study of Taoism, Buddhism, and Pyrrhonism. All of these schools of thought encourage you to let go of cravings and attachments and ambitions, which together contribute to avoiding cycles of hope and disappointment, possession and loss, and pride and deflation. I plan to explore these ideas in depth by writing a novel about the ancient Greek skeptic Pyrrho a few years from now (tentatively entitled Gods Among Men).

I'm not sure how well my personal experience with cultivating serenity applies to other people, but perhaps this post will point you in some fruitful directions.

In 1921, Yevgeny Zamyatin finished writing WE, the Ur-text for most dystopian novels since then (Anthem, 1984, Brave New World, etc.). In 1924, Zamyatin's novel, not yet (in fact never) published in the Soviet Union, was first brought to the world by E.P. Dutton and Company of New York in an English translation by Gregory Zilboorg. Because 95 years have passed since then, Dr. Zilboorg's translation is finally in the public domain - and I have just republished it online at my website for public-domain books, the Monadnock Valley Press.

Here is how Russian-American sociologist Pitirim Sorokin once described WE:

Philosophical as Plato's Republic, interesting as the best Utopias of H.G. Wells, cold as the muzzle of a loaded revolver, and sarcastic as Gulliver's Travels, WE is a powerful challenge to all Socialist Utopias.

Perhaps it is just as timely as ever.

Fresh from a re-reading of Plato's dialogues, recently I dove into Jo Walton's Thessaly trilogy (The Just City, The Philosopher Kings, and Necessity), a speculative epic set in a society consistent with Plato's Republic. It's an enjoyable, thought-provoking blend of science fiction, ancient Greek myth, and Platonic philosophy. Although I recommended Walton's trilogy if you like philosophical novels, I do take issue with several aspects of her story.

First, Walton presents Socrates as a staunch advocate of democracy and the common man (since this is SF, even the common robot!). Yet, as I.F. Stone well relates in The Trial of Socrates, Socrates, despite his rather humble origins, was an unapologetic elitist who consistently pressed for an aristocratic or autocratic form of government in Athens, even when that devolved into a violent dictatorship under the Thirty Tyrants (led, I might add, by Critias, student of Socrates and cousin of Plato).

Second, Walton's several narrators repeatedly assert that over thousands of years Plato was the only thinker to have considered women capable of philosophy. It's true that Plato took on a few female students in the Academy, such as Axiothea of Phlius and Lastheneia of Mantinea. Yet, several generations after Plato, Epicurus opened his philosophical community completely to women and that tradition continued throughout the wider Epicurean movement in Greece and Rome for many hundreds of years; female philosophers with Epicurean commitments included Pompeia Plotina, a Roman Empress and the wife of Roman Emperor Trajan (who reputedly chose Trajan's successor Hadrian, who in turn chose Marcus Aurelius, perhaps the only true philosopher king in history, as Emperor). That's a lot more than Plato and the later Academy have to show for themselves.

Third, Walton has a few of her characters cast aspersions at Aristotle for his opinions about women and slaves. (How these characters could have known about Aristotle's philosophy is unclear, because no doubt his works would have been on the proscribed list in her Just City, as Aquinas and many others were.) Now, I find Aristotle's views on women deplorable and unjustified, even though apparently he treated the women in his own life quite well (read his last will and testament sometime). What he really thought about servitude (the economic foundation of the ancient world) is less clear - some scholars have argued that his criteria for being a "natural slave" (e.g., the complete lack of foresight) are such that almost no human would qualify, and we do know that he was opposed to accidental servitude such as being enslaved because of war or conquest. Furthermore, some of the adjustments that the residents of the Just City make, such as allowing marriages and families, directly oppose Plato's instructions in the Republic and align with Aristotle's criticisms of Plato. And Aristotle advocated democracy, which is more than you can say for Socrates and Plato.

Finally, these are the only novels I know of that would have been banned in the ideal society they depict, for they show the gods acting in ways that Plato would not have sanctioned. I find that ironic and perhaps even self-contradictory.

Even so, Walton's trilogy is well worth reading.

Yesterday I finished phase one of my research into Aristotle's ethics, in preparation for writing Complete Yourself: Aristotle on Personal Excellence. As I described in a blog post over five years ago, for me the process of "working through" a thinker initially involves absorbing all of his or her writings, supplemented by some of the secondary literature. Since I started this project about two years ago, I've read everything by Aristotle and Plato, as well as numerous scholarly books on Aristotle, totalling around 120 distinct works. To give you a sense of the magnitude, here's a photo of the relevant books in my own collection (not counting all the ones I've checked out of libraries throughout Colorado and Wyoming, thanks to the wonders of Prospector, our regional inter-library loan system): 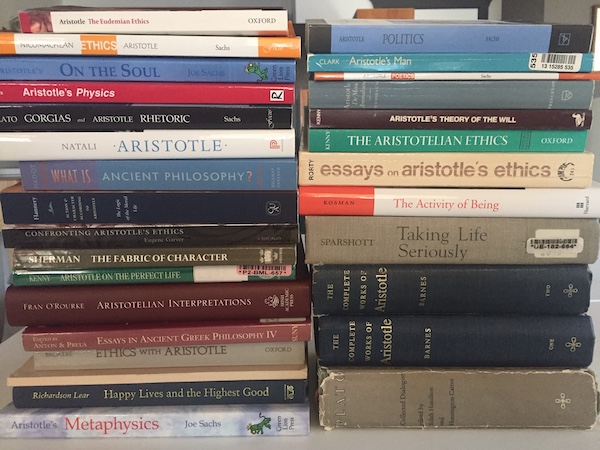 That's a lot of reading! The next phase will be even more intense: re-reading all of the passages I've marked up, identifying the core themes I want to explore, and coming to conclusions regarding Aristotle's answers to fundamental questions about how to live a good human life. Because there is so much deep material to cover, I expect that this next phase will consume most of my free time in 2020. All this so that I can summarize Aristotle's philosophy of life in 100 pages or less, as to date I've also done with Rand, Nietzsche, Thoreau, and Epicurus in the "eudaimonia suite" that comprises my lifelong philosophy project.

For older entries, check the archive. To track changes, follow the feed.