Why bass guitar? Although I've played acoustic guitar since I was 13 or 14, my first instrument was actually electric bass. Indeed, for most of my teenage years I played bass in my high school's jazz-rock ensemble (led by Chuck Milazzo, who happened to be a cousin of Chuck Mangione) and I also played bass in a hard-rock band for a while. When I got into songwriting and composing in college I started focusing more deeply on acoustic guitar and classical guitar, going so far as to sell my old Fender bass. Yet bass lines always continued to speak to me strongly, and more recently I've been devoting renewed attention to my first musical love.

The initial bass project I have underway is a set of arrangements for solo bass guitar of some songs by the progressive rock band Yes. It is in many ways a crazy project, with pieces as long as 15 minutes, but it has me totally absorbed. After that I hope to complete a bass guitar recording of Bach's Cello Suites.

As to influences, Chris Squire of Yes tops the list, followed closely by Jon Camp of Renaissance, Geddy Lee of Rush, and Martin Turner of Wishbone Ash. I love their melodic style on the bass, which is a combination of bass and guitar stylings. Guitarists Steve Howe, Julian Bream, and Michael Hedges have also affected me deeply for their tonal variety and the orchestral quality of their playing. Solo bassist (and frequent Michael Hedges collaborator) Michael Manring is another favorite of mine.

The following words by Langston Hughes well capture my feelings for the instrument (from the poem "Easy Boogie" in Montage of a Dream Deferred): 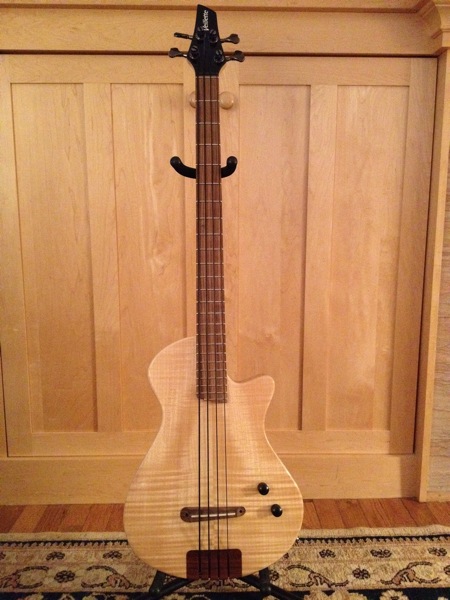 I have my Minotaur strung with D'Addario nylon tapewound strings for a more mellow tone, but I play it much like a classical guitar so my nails produce a trebly bite that would otherwise be lacking.