While other folks were voting or not voting yesterday, I was unvoting. (In fact I voted on the initiatives and referenda, but I unvoted on all those who would claim to represent me.) Here's the top of my ballot to provide some context:

Yes, that's a quote from Abraham Lincoln, in red ink just in case someone was going to gloss over it: 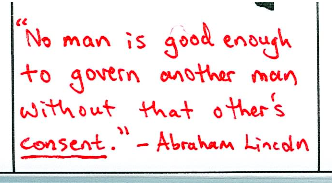 And here's how I voted for those who would claim to be my representatives:

So I am officially on record (at my blog if nowhere else) as having withdrawn my consent from the federal government in the District of Columbia, the state government in Colorado, and the local government in Denver. If "silence gives consent" (as Oliver Goldsmith once wrote), then let my voice be heard loud and clear by these various governments: I am a sovereign individual and your presidents, senators, congresspeople, and other functionaries do not represent me.